The True Threat to Britain 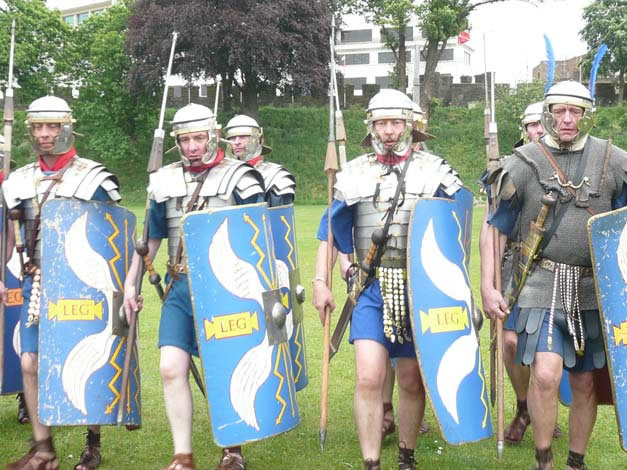 There’s a cop up ahead. Crucify him? Or just harsh words? / Romanarmy.net

Apropos of nothing, I’ve realized that Roman military reenactment is rather popular in the United Kingdom. In a country that has not only strict gun laws, but also draconian laws restricting anything sharper than a cutting comment, there’s an enormous loophole. To bypass those tight regulations regarding knives, swords, and javelins, you need only say the magic words: “Holy shit, have you had a look at Bettany Hughes’s tits?”

So, you can’t go pistol shooting, you’re forbidden to defend yourself with a knife, and even hanging a sword on the wall is a chancy thing. But training in the weapons and tactics of the army that conquered most of Europe, North Africa, and the Middle East and held it for centuries is totally cool.

Let’s be clear. These reenactors could march across the country half-drunk, just like real legionaries, and take it over. At least, they could be impolite while making clanking noises to millions of Britons.

True, The U.K. has a well-trained, and pretty well-armed, military. And if its troops are able to catch an Uber ride, it’s probably game over for any coup attempt too small too fill more than a pub or two. But if that Uber ride is suborned or simply delayed by a fellow traveler…