Home // Uncategorized // Compassion Means Stealing Shit From People Who, Unlike You, Thought Ahead

Compassion Means Stealing Shit From People Who, Unlike You, Thought Ahead 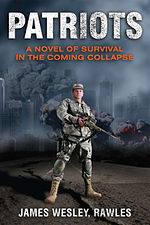 Yesterday, a Facebook “friend” (in the broad social media sense of the term) posted a brief musing about the current flurry of apocalyptic fiction.

If the apocalypse-books industry was a little less “arm yourself to the teeth so your family is the only one in town that doesn’t starve in our far-fetched psuedoscientific global economic collapse” and a little more “use battle-tested American Red Cross first aid and community response training to save as many people as possible during a plausible natural disaster scenario,” I’d have a lot more respect for it. I mean, I’m not going to be the guy who shoots some stranger’s kid over a can of string beans, and people who write books where they fantasize about that sort of thing scare me more than the idea of an actual apocalypse does.

Now, personally, I understand wishing writers catered more to my tastes. If the romance novel genre had more sex scenes and less heartwrenching relationship contrivance, I’d “have a lot more respect for it” too. In the morning, I mean. But romance novelists have hit on a formula that works, and they don’t need my respect. The same goes for apocalyptic fiction and my Facebook acquaintance’s complaints.

I’m also not entirely sure what this guy is talking about. I’ve read a few shit-hits-the-fan novels, and they boil down to ant-and-grasshopper morality tales, though the ant usually (unlike in the original fable) rises to the occasion to help out neighbors and rebuild a community. There are lots of books and lots of takes, of course, and maybe Facebook guy has a specific dude-in-his-bunker book in mind. But the granddaddy of the current apocalyptic fiction flurry is probably Patriots by James Wesley, Rawles (no, the comma isn’t an accident). Patriots, once you get past the use of “are you a Christian?” as the gag-inducing secret handshake of the economic collapse, focuses on people who planned ahead to survive the worst and reconnect with others.

Anyway, that’s an aside, the real point is that the first comment on this musing was:

If an apocalypse ever happens, I’m going to make it my sole mission in life to gather together an enormous mob of people to take out all the survivalists, and then use all of their stockpiles to build a socialist utopia.

Photo by the U.S. Government

Why do I care? Because Facebook guy is a civil liberties columnist and advocate. In fact, he inherited a civil libertarian gig I had years ago, though he writes from more of a progressive/SJW perspective. He’s also very active as a political lefty in his community (the one that preppers apparently plan to barricade the doors against). This progressive “civil libertarian” perspective apparently includes the idea that if people have more foresight than you and put aside some provisions for hard times, it’s OK to gang together with other dumbasses who didn’t stick some canned soup in the pantry, kill the prepared types (I’m interpreting “take out” by its usual usage), steal their shit, and use the stuff to impose your preferred political and economic system on the survivors. This is a whole step beyond just wishing the SHTF fiction genre was nothing more than a series of boring tracts about the Red Cross’s good deeds. I’d have to turn my bitching about romance novels into a rape fantasy to achieve the equivalent, and I’m not a sufficiently shitty human being to do that.

To give this guy his due, he does advocate for civil liberties in an effective way on a lot of issues. He’s generally very good on police abuse, search and seizure, and free speech. But it’s interesting how overtly thuggish a professional civil liberties advocate can be in an unguarded moment–to the point of high-fiving the idea of mass violence and totalitarian impositions against those who rub him the wrong way.

Is there a take-away here?

Yeah. Be very cautious of those who set themselves up as guardians of your liberty. You never know when their personal preferences in some other area will overcome their regard for your freedom.

Oh, and I know Fifty Shades of Grey has sex scenes. I just can’t… No thanks.